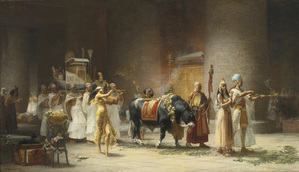 I'm not a male, I'm not a female; I'm gender fluid and I love me. Please respect that by referring to me in gender neutral terms, such as they/them/their pronouns.

What I Will and Won't Do For You:

I don't cast spells for strangers with circumstances I don't know or don't agree with. However if you give me a request for prayers to be said in your honor or for your circumstances I'd be more than happy to take it before my deities.

I am a Kemetic practitioner and revivalist. This means, quite simply, that I study and practice as the ancient people of Kemet did or the closest approximation of what they did. Kemet, or "the Black Land" or "the Black Soil", is simply the ancient Egyptian word for the land of the Nile; what was Egypt in ancient times. Deshret, or "the Red Land" or "the Red Soil" stands in contrast to what was ancient Egypt, and often formed their borders with other countries.

I am a Shemsu-Ankh within the Kemetic Orthodoxy, and always willing to answer any questions on it that I can. I do reserve the right to refer you to House of Netjer's various links.

My Shemsu name is Ra'awyserqet. My name is pronounced Ruh OW wee sair KETT. This is the name given to me by my (spiritual) Mother, Serqet-Aset, via Hekatawy | (aus). I also recognize Hemet (aus) or Hekatawy (aus) as my Mother and Father. (It's a Nisut thing.)

I have practiced magic for over a decade now, heka for the last several years although my knowledge of it (and how to perform it properly) is always growing. I generally refer to my "magical" practices as heka now, as I always use at least one concept of heka. The heka I do is aligned with my religious/spiritual affiliations, as in Kemet there was no separation of temple and practice.

I have practiced magic since I was a child. I didn't start by learning the basics, I started magic by feeling my own energy and working with it, I started it by working with and talking to the various spirits in nature. I only learned the basics after I bought a book on Wicca, so I don't see their purpose outside of that religion.

I have worked with demons, angels, fae, daimons, Gods, Goddesses, and other beings. I find that not all that is light is good and not all that is dark is bad. I do not fear the beings I work with, but I cultivate a healthy respect for them. I believe that a lot more can be done when you respect the beings you work with than by attempting to force them into obedience.

I am experienced in chaos magic, channeling (to a degree), sigils, seals,divination (to varying degrees based on the specific system), invocation, evocation, heka (to a degree), and several other things I've forgotten at the moment. I am currently studying into the ancient Egyptian priesthood.

Every day the choice is presented to us, to live up to the spirit that is in us, or deny it. ~Henry Miller

Just because you know it, doesn't mean everyone else should. ~Cvissher

No matter how harsh or how hard things might seem, it's all done out of love. ~ Serqet