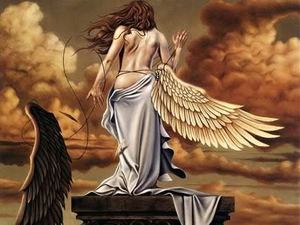 My name is formed of the words "sat" and "Aset". Sat being a description of one who is a sorcerer, an enchanter, and/or a reciter of spells, and Aset being the Kemetic/Egyptian name of Isis that I use. To me, my name means thus, "Sorcerer of Aset", "Enchanter of Aset", "She who recites spells for Aset", "She who recites Aset's spells". Sat can also relate to duties or responibilities, so it can also be taken as "She whom has Aset's responsibilities" or "She whom does Aset's duties" or another variation. My translation may not be perfect as I am just learning to work with hieroglyphics during my down time between all the things I do.

On this site I am also known as Raawyserqet, and I was known as Kebs and Kebechet previously. I am a Kemetic practitioner and revivalist. This means, quite simply, that I study and practice as the ancient people of Kemet did. Kemet, or "the Black Land" or "the Black Soil", is simply the ancient Egyptian word for the land of the Nile; what was Egypt in ancient times. Deshret, or "the Red Land" or "the Red Soil" stands in contrast to what was ancient Egypt, and often formed their borders with other countries.

I am a Shemsu of the Kemetic Orthodoxy or House of Netjer. Shemsu are those who are "followers of the royal household", are converts to the faith.To do this, I had to take the 11 week Beginner's Class, pass the Exit Interview, request status as a Remetj (a friend of the faith), and then undertake the Rite of Parent Divination. Within the Kemetic Orthodoxy my name is Ra'awyserqet. My name is pronounced Ruh OW wee sair KETT. This is my Shemsu name. My Mother is Serqet-Aset, my Beloveds are Sekhmet-Mut and Yinepu-Wepwawet as divined in the Rite of Parent Divination. No, this does not literally mean my mother, but rather it is a way of describing the relationship I have to these deities within this organization.

I have practiced magic for around a decade now, and yes I do call it magic rather than magick. To me, it shouldn't matter how I spell it on this site, all magic I discuss will be about real magic and not some slight of hand. I first began through reading about magic in a fiction book, and as a result working with psychic links between myself and others. I was studying ancient Egypt for about two or three years previous to this. So you could say this has been my life-path for me. As my belief in the Christian god slowly slipped, I began to pray more and more to the Kemetic deities, asking them for various things in my life. Due to life, I spent a few years not believing in much of anything, until I was reintroduced to it and to magic at 17. Four years later, and here I am.

I am experienced in chaos magic, channeling (to a degree), sigils, seals,divination (to varying degrees based on the specific system), invocation, evocation, heka (to a degree), and several other things I've forgotten at the moment. I am currently studying into the ancient Egyptian priesthood and Heathenry.

Every day the choice is presented to us, to live up to the spirit that is in us, or deny it. ~Henry Miller

Just because you know it, doesn't mean everyone else should. ~Cvissher

I'm currently offering three different kinds of readings:
~Standard ($5)
~Speak to a specific Deity ($10)
~Reading with a Deity and an offering on your behalf ($15)

I have a few more divination systems I use, but currently these are the only ones I'm offering.


This is the link to the page: http://backwood.x10.mx/Market

If you wish to share this page with anyone else, please feel free!