SHOPPING CART
You have no items in your shopping cart.
POPULAR ITEMS
You may also like:
1 Lb Mullein Leaf Cut

WISH LIST
You have no items in your shopping cart.
PRODUCT SEARCH
ONLINE STORE HELP 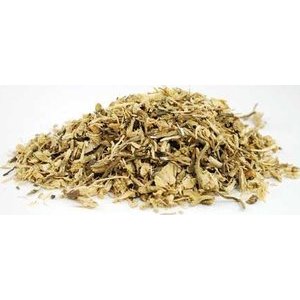 Item Out of Stock
You may add this item to your wish list, but it can not be ordered at this time.


Description
Butcher's Broom root (Rascus aculeatus) gets its name from is former use in creating brooms used to sweep Butcher's stalls, and the use of the stems in protecting meats from rodent. A native to the Mediterranean, Southern Europe, Africa, and the Mid east, it was used throughout the ancient world, and is found in Pliny's writings, where he suggests it in the treatment of swelling veins. Later, Culpepper suggested it might be of use in treating broken bones. Modern uses for Butcher's Broom root go back to the wisdom of Pliny, as modern herbalists traditionally recommend it for the treatment of varicose veins and similar circulatory matters. It is even recommended by German Commission E for this purpose. Interestingly the same commission also noted that Butcher's Broom Root is useful in treating hemorrhoids. This is a 1 lb packet of cut Butcher's Broom Root.

All descriptions provided for our herbal products are for educational purposes only, and have not been evaluated by the food and drug administration. The information is not intended to diagnose, treat, cure, or prevent disease.